Maybe you’ve heard … Shotnez is the self-titled debut by the founders of Balkan Beat Box, Ori Kaplan and Tamir Muskat. It mixes Middle Eastern and eastern European influences with noise Rock and crime Jazz, in other words punk rock minimalism meets Middle Eastern complexities… and it’s as badass as it sounds.

The result of this fusion is a mix of high-speed chase appropriate electric-guitar odes to brass anthems peppered with tin-can percussion beats, frantic globe-trotting sex appeal, interludes reminiscent of when Pontoffel Pock first meets Neepha Pheepha. Sober tracks like Golden Apples give way to uber-sexy tracks like Swag, and before you know it you’re in the middle of a mental bar fight listening to Chaos on repeat.

The debut album will be released into the wild on JDub Digital on April 5, 2011, That means TODAY and your Burdel Dali Crew have exclusive and amazing news for all our comrades! We’ve got the first single off the album for your listening pleasure… 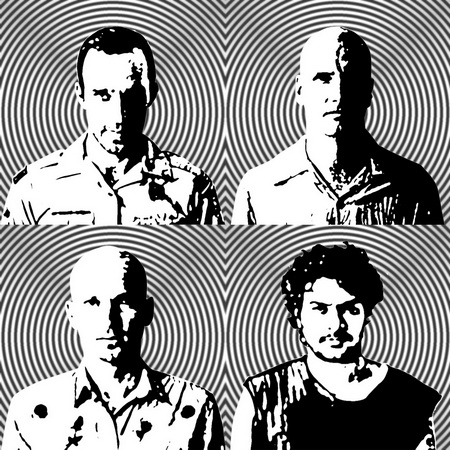 Be sure to check out the whole album! We’ll keep you up to date on Shotnez projects & events as they hit!

Immigrant anthems for global citizens... wine is cheap, life is short, and history repeats itself... Opa---! ★

Three music loving, glass breaking global citizens who have taken on the ridiculously jovial mission of spreading trans-global beats, audio folklore, and border-jumping dress codes as far as it will reach from our outpost.

We are available for all manner of events from private parties to museum gallery opening receptions, weddings, concert after-parties, festivals, and anything else that requires a frantic dose of hyper-festive global appeal.

Our weekly party has been rattling the lower east side for over three years and we're waiting for you to come and sink your teeth into this crazed celebration of world-wide anthems!

Every Thursday at Mehanata Bulgarian Bar (113 Ludlow, between Delancey & Rivington). Live music at 9:30PM, Raphlex & Mishto at 11:30PM. Special appearances all over the place. Stay in touch to see where we'll be next!

Add us on facebook to stay up to date on parties.